Went for walk around Bluewater township & through a bush track.  The ranger dropped in on our second morning & was recording everyone’s rego numbers.  It’s one of the few places I’ve actually seen anyone checking on length of stays & a couple of motor homes were here when we stopped in heading north over a week ago.  The signs state 24 hours but I thought they’d be a bit more flexible off season.
After 48 hrs hear we moved down Saunders Beach 13 klms away.  It’s a nice beach spot but the camping is restricted to 2 sides of a small gravel parking lot.  You need a tap key here as for some reason they don’t want you to access the town water.  Obviously, there’s no swimming due to crocs & stingers.  There is a bistro but we didn’t get to try it out as we only stayed one night, but you are allowed to stay 2.
It was Friday the next day & we had arranged to take the van to Townsville Marine Electronics as the sat dish had locked in the up position & refused to budge.  We couldn’t drive with it up so I had to get up on our ladder and loosen the nuts on the main shaft & lower the dish manually.  The tech reset the dish and it seemed to be working at the time.
After doing some shopping we headed for Fletcher Creek 40 klms north of Charters Towers going via Ross River Road then down the Gregory Development Road.  Other than a fairly steep range to cross the Ross River Rd was in very good condition while the Gregory was mainly single ragged edged bitumen, fortunately with very little traffic.
Strangely there were several camps set up on the north bank near the toilets and a dozen or so on the south bank but all located on the western side of the road.  So we camped on the eastern side and virtually had the area to ourselves.  This is a beautiful free camp with a one month stay limit.  But by the look of a few of them already set up, they plan on staying much longer.
Our bad luck hadn’t finished with us yet and the sat system couldn’t get a strong enough’s signal to pick up any channels so we contacted Springers via our satellite phone and they talked us through several procedures which failed to produce any results.  They believed it was a faulty Vast box so they arranged to send us a temporary replacement via express post to Charters Towers which should be hears in 3 days or so.
We then noted our power was not holding as good as it usually does, so I tested all the solar panels and found at least one was dead & another not producing much.  We were only getting about 17 amps at midday and when they’re all working properly it’s usually double that.
We also found that the new fridge was icing up and running constantly also draining the batteries further.  The only benefit was I got to give the generator a good run.
We had no choice but to move on to Charters Towers and get on a powered site somewhere until we received our new vast box.  We would then likely make our way back to Brisbane & get things sorted once again.  Bah hum bug…..

On Saturday we went for a drive to Silkwood where we used to live 24 years earlier & visited Dina & Lou. They invited us to come & stay when we leave Babinda so we planned to return the next afternoon.
We drove to Cairns Saturday night for Greg’s 60th birthday party being held at Ridges Motel in Cairns. It absolutely poured down all the way with some guests being delayed by flooding coming from Townsville.  We enjoyed a great seafood buffet and ate far too much.
Sunday morning we moved on to Silkwood to spend a couple of nights with Dina & Lou.  We went to the Villa Monarco restaurant at Kurrimine Beach that night & enjoyed a 3 course BBQ buffet for $10 a head.  Great food & great friends made for a very enjoyable evening.
One thing about visiting the Campagnolos is they always seem to find new tropical exotic fruits for us to try.  These Italians really know their food & it’s a wonder they aren’t all hugely overweight, but they are very active people & have been hard workers all their lives.  They are the most welcoming & joyful people we know & have enjoyed catching up with them once again.
We left Silkwood on the Tuesday in search of sunshine as we were becoming water logged & the ants were taking over the van.  We called into the Frosty Mango for morning tea & I had a mango smoothie & Deb had a lychee ice cream & lemon sorbet.  Evil but nice!  We then pulled into the Bluewater Free Camp just north of Townsville.  It’s a great spot with toilets, dump point, tap water and surrounded by a beautiful park and a creek.  The water hole looks very inviting but I’m a little reluctant to jump in this close to the coast.  We also had the added bonus of sunshine & after all the rain you can almost see the grass growing. 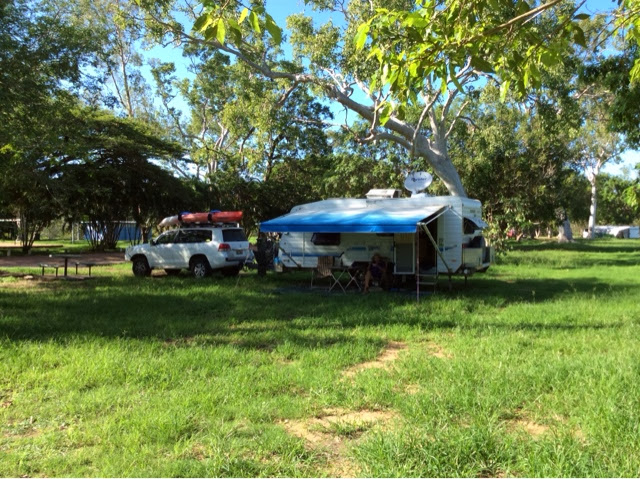 While heading north through Cardwell we came across Debbie’s brother Greg & his wife Judy.  They were on their way to a meeting in Townsville overnight.  We had coffee with them & arranged to stay at their place in Babinda for a few days.
I’ve got to say the Bruce Hwy is in very good condition from Rockhampton through to Cardwell at present with the rest under quite a bit of road works.  Cardwell looks great with the beachfront all renewed after the previous cyclones.
We had the usual weather for this time of year with wet & humid days.  It was great catching up with Greg, Judy & family as it’s been quite a while since we’ve been up this way.  Judy took us for a drive & walk up to the Babinda Boulders that were flowing very well due to the rains.  We checked out Angie & Brads block with a huge shed that they are in the process of having closed in and converted to living quarters.
Friday, Greg & Judy headed into Cairns to stay for a few days to celebrate Greg’s 60th birthday.  We’ll  be joining them for dinner on the Saturday night.

On the road again heading north up the Bruce Hwy while Laurie & Helen went to 1770 for a couple of days to try & catch those elusive fish.  There was several stop & goes along the way which we really can’t complain about as the majority of this road is in very good condition, especially when compared to the Warrego Hwy.

We pulled into the St Lawrence Recreation Grounds for the night which had been recommended by many people.  We were not disappointed as the facilities were excellent & the wetlands were a beautiful backdrop.  There was also plenty of magpie geese due to the recent heavy rains. There is a donation box which I don’t have a problem with contributing to, but I doubt any of the backpackers in their wiz-bang vans did.

Along the Bruce Hwy the next day we were surrounded by heaps of water which was only half a metre or so below the road level.  Unfortunately we had a bright idea to go into Carmila Beach free camp & check it out while we had smoko.  There’s a track running parallel to the beach with lots of small tracks branching off leading to individual camp sites.  My advice is walk into the camp sites as they can be quite boggy, as I found out the hard way.  Well, I don’t really consider it as bogged as I got myself out by digging around the tyres & letting them down to 20psi.  This I call a momentary pause.

We  passed through numerous showers & pulled up at another great free camp/rest area at Guthalungara. In peak times I imagine this would be packed out quite early.  And guess what? We’re near a rail line again.  Just like back home.

We checked into The Absolute Waterfront Caravan Park at Bargara.  As the wind was howling we took one of the back sites.  It’s an old park but the facilities were clean & it was only about a 10 minute drive to Mon Repos.  The camp located at Mon Repos has closed as the owner is a greeny and doesn’t need the money anyway.

A visit to Bundy has to entail some stocking up on the local distillled beverages.  We also bought some fresh prawns and coral trout from the local seafood co-op, they were fantastic.
We arrived 30 minutes early at Mon Repos & were told that a nest of turtles had started hatching so we were let in early & got to see the tiny loggerheads emerge from the sand in day light.  They brought around a few for us to hold & take photos & I was quite amazed at how strong their little flippers were.  After about an hour and a half they had all come out & were being contained in a small mesh barrier.  We were formed into a guard of honour down to the water and they were released en mass. The ranger stood at the waters edge and they all headed towards the light and began their 8 year round the world trip.  It would then be another 18 or so years before it was their turn to lay eggs.  All the shells are then dug up and counted and logged, including about 12 that hadn’t developed.  A very special event and well worth the effort.

Laurie & Helen came to spend a few days with us as we were waiting for weather up north to settle from a Cat 2 cyclone.  Laurie had his tinny so we set out to catch some monster barra.  With permits and some fantastic lures we fished & fished & fished, but to no avail.  I don’t know what it is but when we fish together we don’t catch fish.

After losing a couple of lures to trees over 3 days Laurie decided to pack the boat up.  This was after he somehow dropped his best rod over the back of the boat.  We were in about 30ft of water so not surprisingly his attempts to snag it up were fruitless.  Just the same, there was some beautiful scenery out on the lake & it’s a great way to get out & appreciate it.