Traveled out through Warwick stopping at Sutton’s Shed Café near Stanthorpe for lunch which consisted of home made pea & ham soup with fresh bread followed by their incredible apple pie & cappuccino. On arrival at Copeton Dam we set up right on the waters edge out on a point.  It had a white sandy beach with a wide variety of birdlife all around us.  There was one other small group camped about 200metres away but they were due to leave the next day. 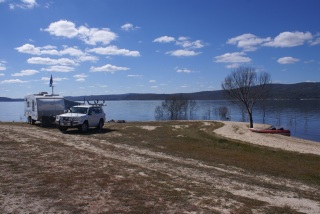 Gordon & Chris joined us Sunday afternoon. I caught a nice yellow belly in the kayak, we went for several walks, a paddle across the lake where we entered a beautiful inlet & saw wild goats grazing along the shores.  There were hundreds of fairly large roos in the park, as well as deer with some good-sized antlers.  Sammy wanted to go and play with them all. We had perfect weather with cool nights and clear warm days.  We virtually had the place to ourselves and can’t believe there wasn’t more people there. 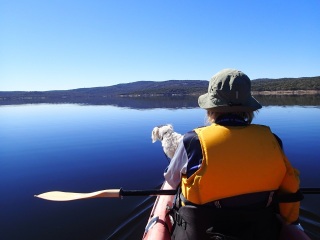 We set up in one of our usual spots but a little back from the waters edge as the ranger at Copeton advised they would be letting out some water for irrigation in the next few days.  We have had varying reports of how high it may get so we plan on watching it closely. I excused myself from my diet for one day as I had to have a Bingara Bakery pie & apple turnover, they are to die for.  And my dietician would probably say I could!  But you’ve got to enjoy life & I promised myself to get back on the diet and be good from now on. Again great weather made this a beautiful stay and we always enjoy this location despite Debbie & I both having the flu again.

A rather cool 3 degrees while packing up to move on to Pilliga.  We left via the show grounds to empty tolets & fill water tanks.  Martin & Amanda went via Tamworth to get a door handle replaced & would be meeting us at the bore.

To our surprise there was quite a crowd camped at the bore, as in the past there was only one or two others there.  We still managed to circle the wagons & have quite a nice camp spot only metres from the bore pool.  The water was a beautiful 40 degrees, crystal clear and they now clean the pool of any slime once a week, which makes it a much more pleasant experience. 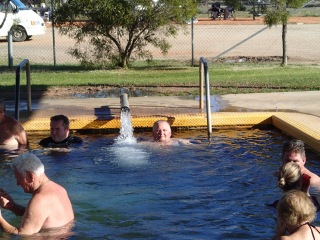 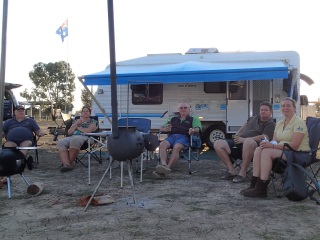 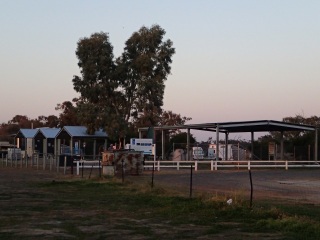 On the Tuesday we walked 2.7 klms along the Wetlands Walk into town and had lunch at the cafe then back along the road approx 1.6klms.  The dogs as well as humans had a good walk and the cafe food was quite good.  A good soak in the pool was well deserved after this.

We were blessed with perfect weather and our camp fires were enhanced by the superb display of stars every night.  Now, this is living!!!

The dirt road north to Burren Junction was pretty good most of the way, but got a little corrugated towards the end & we broke one our Kedron mugs, damn it.  There was quite a few camped here as well but I was told that it was packed to capacity about a week earlier.  Thank God we missed that.  It looks like we ‘ll have to venture to even further remote locations for some peace & quiet.  The whole area is covered in mexicans heading home at present.  We should start taxing them!!!

The bore baths here are almost 6’ deep and the algae is not cleaned off, but the water is still very clear.  The amenities with flushing toilets were basic, but fairly clean at the time of our visit.  It’s very relaxing laying in 40 degree water under a warm spring sky.  At here and Pilliga it is free camping but they do have donation boxes which we support as it goes to the local communities who provide & maintain these sites.  They have also provided taps all around the perimeter of this camp & a dump point on site.  What more could you ask for?

Gordon & Chris had to leave us here as they had appointments to attend to.  It was great having them along and hope to meet up again some time soon.

We headed west from Burren Junction to Walgett where there is a good overnight stop, but we just stopped for smoko & continued on to Lightning Ridge.  We checked into the new park located across from the thermal pools.  Reasonably priced & excellent amenities.

We went for a dip in the thermal pools but didn’t last long as they are quite hot, so it was back to the park & cool off in the pool.  Nice!!

Friday we went for a drive around town & checked out the Green Door tour, which was nothing spectacular so we drove just south of town to check out the Lorne Station camp.  This was only $10 per night but looked rather feral compared to what’s in town.

Debbie had to take a pair of earrings back to the Opal Cave as a small opal had fallen out of the setting. As usual we couldn’t resist spending some more of the kid’s inheritance & I purchased a beautiful green opal ring.  Whooops!!  Blew the budget again. 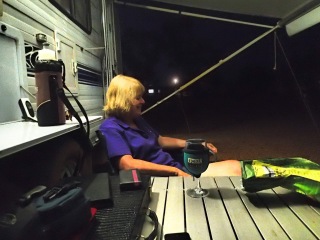 Deb & I went for about a 6klm walk into town & had an iced (skinny for me) coffee.  I think Sammy thought he was going to die, as it was 33 degrees and no water for him to jump into anywhere along the way.

Some entertainment was provided on the lawn in the Opal Caravan Park by Willy-Not-Nelson & his partner.  It wasn’t bad and all they asked for was a donation for the 2 hours that they were there.  We then moved to the camp kitchen to watch the federal election results & have a BBQ dinner.  Labour was punished for it’s bad behaviour and on-going in fighting over the last few years.

We packed up camp, topped up our water, emptied the loo, did a small shop for supplies & headed off up the highway to meet up at Angeldool, a supposed ghost town, with Martin & Amanda who went via the dirt road for something different.  It turns out the ghost town is nothing to see at all so we met them at Hebal on the Queensland border.  Not much here, but a little store that serves great food with friendly service.  The historic pub across the road is worth a look also.  It was typical of many outback pubs with all sorts of paraphernalia over the walls.  This section of road is quite good all the way to St George.

Kapunda Camp is 9klms east of St George and at $20 per night it’s a great spot on the river with clean amenities and fires permitted.  Kayaking is excellent here and we continued to be blessed with perfect weather with nights down to 12 & days up to 33 degrees.

Deb, Sammy & I went for a 2 hour paddle up river which was most enjoyable and although exercise was partaken, it was very relaxing.  The clear blue skies, cool (although muddy) waters and the sounds of various birds in the trees along the way made it a most pleasurable trip.  Oh, I love this sunburnt  country, though it can be quite cruel out here in summer. 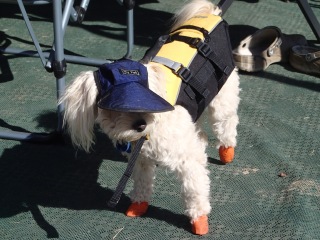 We went for a walk along the river in St George, while Martin & Amanda went to the Riversands Winery.  We stopped & had morning tea at a little sidewalk cafe and back to the car covering over 6 klms.

A couple set up camp beside us and joined in around the campfire for a few ales.  Brian & Jenny were cattle & sheep graziers from Lake Bogar near Swan Hill.  Nice people who offered for us to drop in and camp beside their creek anytime we are passing that way.  We hope to be able to take them up on the offer next year on our way to Adelaide once we are retired.

A nice short run today and the road is very good bitumen all the way.  They have recently installed bollards and a concrete walking track to protect the river front as it seems to be quite popular with the nomads as it’s free and across from the pub.

We only planned to spend the one night here and you wouldn’t believe it, the Cystic Fibrosis rally was in town tonight.  So there was plenty of entertainment into the night.  We enjoyed dinner & a few wines and marvelled at the giant truckie burgers that weighed in around 5kg & cost $60 each. 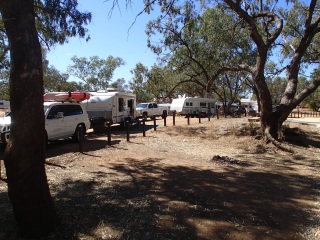 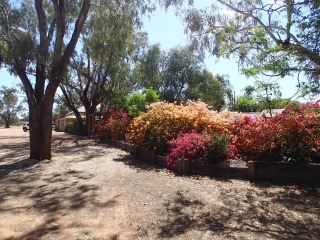 Martin & Amanda said goodbye & headed back home today as they had some business issues to sort out.

What a day!  Our intention was to travel 420klms and stay at Yarramalong camp ground for the last 5 days of our holidays.  But unfortunately, what we found was nothing like the website.  The amenities were filthy, there was rubbish scattered about & much of it had been there for quite a while.  We required sun for the solar panels and the only open area was on a oval several hundred metres from the water.  They had a generator running nearby that was a large diesel type which was making one hell of a racket.  We quickly decided this was not a suitable place to spend the last few days of our holiday so we started heading for Imbil (near Gympie) after consulting with David & Stella who were going to join us for some kayaking on the river.

We planned on stopping overnight at the Kilcoy free camp, but this has been closed & you are directed to go to the show grounds instead.  So we continued on to the Cruice Park rest area near Woodford.  While walking around trying to find level ground, I had just turned my torch off and tripped A over T on a pile of rocks and landed very hard on my left shoulder.  Lucky I’m tough and sucked it up and carried on.

We started out around 0630hrs and went via Melany & Kenilworth and were held up several times with roadworks on the ranges.  I must remember not to go this way with the van on as it’s very steep in places & quite rough.  The camp ground was quite busy but we were fortunate enough to get our usual spot on the waters edge.  I love this place for the bird life, tranquility and scenery and hope this stays as it is.  Places like this are few & far between. 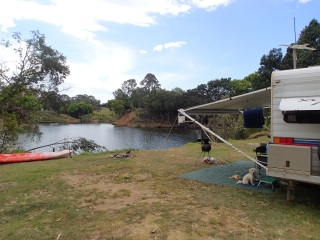 On Saturday Dave, Debbie, Sammy & I walked up to the lookout from camp.  About 4.5 klms but very, very steep.  Had to stop & admire the view several times on the way up.

Sunday morning and Craig & Wendy arrived for a paddle up the river.  We went about 5klms upstream having to drag the kayaks over half a dozen or so shallow rocky sections.  It was very enjoyable as the water was clear, there were no weeds due to the recent floods and the rainforest came right to the waters edge in most places.  It ended up being a 4 hour trip and well worth the effort. 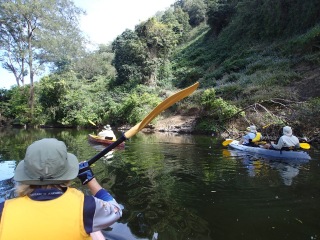 Monday was overcast with a storm late in the night.  Deb, Sammy & I walked into town for lunch at a cafe but other than that it was a rest day.  Particularly as it was our last full day here.  😦

Well it rained most of the night and it was time to return to reality with doctor’s appointments, washing & ironing to do, all in preparation for the other temporary part of our lives………..work.